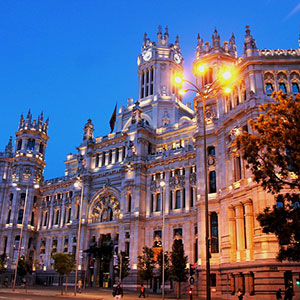 This affordable tour of Spain and Portugal will introduce you to an exciting Iberian adventure with fascinating cities and cultural discoveries. Spend three nights in Madrid, two nights in both Seville and Lisbon, and one night in Coimbra. Enjoy sightseeing with a Local Guide-an expert in the city’s history and sights-in Lisbon, Seville, and Madrid. The included city tours focus on the must-see sights, including Seville’s impressive Plaza d’Espana, built for the Ibero-American Exposition in 1929, and Lisbon’s Belem Tower, a UNESCO World Heritage Site built around 1514 to commemorate the expedition of Vasco de Gama and to defend the port of Lisbon. Today, it is a reminder of Portugal’s Golden Age. In Madrid, you will see the Puerta del Sol – the “gate of the sun” – and admire the impressive architecture of the wide alleys crossing the city center.Other visits of this affordable Spain and Portugal tour include the Marian Sanctuary at Fátima, a famous pilgrimage site where the Virgin Mary appeared to three local children in 1917; Obidos, a fortified city still flanked by towers and bastions overlooking the countryside dotted with windmills: Moorish Cordoba, and Salamanca, where you can wander around Salamanca’s Plaza Mayor, considered the most beautiful square in Spain.At the end of the tour, you’ll complete the experience on a Monograms extension to Barcelona travelling on the AVE high-speed train. Your Local Host will be available to assist you during your stay, with dining recommendations, sightseeing suggestions, and more. The included guided sightseeing tour of the city will include a visit of the extraordinary Sagrada Familia Basilica. Your budget-minded tour of Spain and Portugal will stay a favorite travel memory for years to come.

The airport for Puerto La Cruz in northeast on the Caribbean. Isla de Margarita is off the coast.

Portugal is for explorers. Its valiant seamen first charted the Azores, discovered Japan, and unlocked the major sea routes the world over. Now you can share the anticipation they must have felt as you explore this exciting city.

You’ll discover an 8th-century Moorish castle, quaint cafes and a palm-studded coastline. The Alfama district is a maze of narrow, twisting streets, whitewashed houses, flowered balconies, archways, terraces and courtyards that charm your socks off. (And if you can find your way out of this dizzying array, 20th-century Lisbon is just as intoxicating.)

Of course, if you’d rather play by the sea, the Portuguese Riviera lies just outside town, offering something for everyone, from sun, sand and surf to thrilling casinos. Lisbon is a vast garden abounding with flowers and tropical plants. The city’s appeal lies in the magnificent vistas from its many belvederes and in the tree-lined avenues and squares decorated with mosaic pavements.

This historical city, located in Andalusia, is one of the world’s most beautiful cities and contains many landmarks, including the Moorish Alcazar and the Gothic Cathedral. Seville was also the site of the 1992 world’s fair.

Prices are per person, land or cruise only, based on double occupancy. Offer subject to availability and change without notice. Some restrictions may apply. Please ask us for details.

Charges not included in the land vacation price: airfare to and from the start of your vacation; airline baggage fees including checked and/or excess baggage fees; Federal inspection fees for the Federal U.S. Customs and Immigrations; agricultural tax; other per person taxes imposed by government entities; applicable cruise taxes, fees, fares and port charges; passports; visas and vaccinations; transfers; tips to your Tour or Cruise Director, Local Host, driver, Local Guides, and/or ships’ crew; gratuities on ferries, trains, and cruise ships; laundry; telephone; minibar; alcohol, beverages, and food outside of the contracted menu as presented at a hotel or restaurant (these extra items will be billed to you before leaving the hotel, ship, or restaurant); additional excursions and activities not listed as ‘included’ in the itinerary; porterage at airports or train stations; Travel Protection premiums; and all other items of a personal nature.

Request A Quote Send To A Friend Have A Question? Contact Us

Send To A Friend

Please don't close or refresh the page while we are processing your submission
Please be patient, this could take a few minutes.